First off, wow.  It has been a long time since I wrote a book report. But it’s easy to write one about a wine history book.

9 years, going back to my last year in university.  The one before that was another 4 years prior.  The last book report I wrote was for a class called German Political Mobilization from Bismark to Hitler.  The book assigned was called General Motors and the Nazis and was about General Motors ownership of the German car company Opel during the Third Reich.

This post is a part of a series: Read More Wine Book Reviews

Moving on to Wine & War

The book Wine & War: The French, The Nazis & The Battle for France’s Greatest Treasure is a series of anecdotes which the authours obtained by interviewing the participants and sometimes their descendants.  The book was a quick and easy read, a perfect choice of a wine book for war history buffs.  Though the subject matter includes an occupied nation, imprisonment, and the odd execution, the book is in a tone of how grandpa would tell the stories to the grand kids, gathered around the easy chair.  Contrast that to the much-less-desirable light reading of the tone of shell shocked survivor, searching for solace in conversation with his therapist.

While you may want to drink at the therapists’ office, it’s not usually an option. However, most of us would gladly choose to hang out with a glass of wine listening to grandpa tell stories in the living room, and that’s what you’ll get with this book.

In my view, the book is not about wine; it is about the occupation.  Wine is the vehicle to discuss the occupation and wine industry workers, where vignerons and negotiants are the ones to tell their stories.

Wine & War is filled with tales of pulling one over on the Wermacht.  My favourite tales include a winemaker closing off a section of his caves containing his best wines, rubbing dirt on the new wall and having his young son run around the cellar finding all the spiders he could and place them over the new wall to help it look older.  Another is about smuggling Maquis (French resistance) members across the demarcation line.

Herman Goring was a despicable human being.  I have never had anything good to say about him.  However, I can now.  He had great taste in wine apparently.  Though that is likely overshadowed by another of his faults, his poor taste in the method he acquired it.

I mostly read this book before bed.  Which had an amusing affect on my dreams.  I kept dreaming I was in Burgundy trying to hide Pinot Noir from the Nazis.  The hard part about that is that Wermacht are good at detecting it and the stress of the endeavour was effecting my sleep.

How the real people did this for 5 years, escapes me.  The stress must have been unbearable.

Perhaps the most satisfying part of this book was when the war ended. The nobility and humanity shown by individual French and Germans to help rebuild was staggering.  It is easy for a North Americans to vilify the entire German nation of the time.  It would have been even easier for the French to be angry, acting vengefully toward anyone who was part of the occupation. But this was not always the case.  I found it warming to have several examples to challenge both these notions. 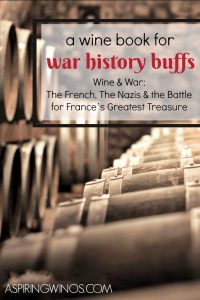 Baron Rothschild hired a weinfuher to sell his wines even though the Nazis had just executed his wife. Germany appointed weinfuher throughout wine regions. They oversaw wine production and logistics. These appointees made sure the wine was produced, properly packaged, and shipped back to Germany

Who Should Read This Book About Wine History?