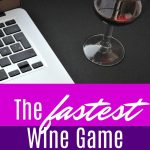 The Wine Bloggers Conference has a rather intimidating tradition, especially for first-time conference attendees like us. The tradition? The fastest writing of red and white wine reviews you’ll ever do.

Allow me to set the scene for you. There’s a huge conference room full of approximately 200 people who have already had some wine that day. Okay, more than some.

Everyone is at tables, ready and waiting for wine. There’s 25 wineries, ready to rotate every five minutes between tables. In just five minutes, they have to pour for a whole table of 8 people, give us their elevator speech and answer our questions. Meanwhile, we, the bloggers, only have five minutes to get enough information about each bottle, taste it, WRITE something about it, spit/dump the remainder of our sample, and move on to the next one.

All of this happens TEN times in a row. Even with spitting, it’s a lot to process! The volume level in the room is super-high, with all of us shouting at the winery reps and them trying to get their pitches out in minutes. If you’ve ever felt pressured to create a tasting note before, this is a whole other kind of pressure!

For the Live Red Wine Blogging, my first time, I wrote a blog post while Jeff tweeted. The second time, I tried Instagram out. I posted from my phone, then added comments from my laptop, so I could type more quickly. I think I prefer the Instagram method, especially as it is more visually engaging. Here’s a collection of our white wine reviews for the ten wines that blitzed by us in a rush! They are presented somewhat like Noelle and “Hubs” did, in their She Said/Hubs Said Live White & Rosé Wine Blogging experience, and I strongly recommend you check out that post for Hub’s colour commentary, especially by the end.

A 2015 Roussane from @gardvintners at tonight’s #wbc18 retails for $24. Aged in the #chateauneufdupape style. Got some greasy mouthfeel (in a good way!) #columbiavalley #wineries #estategrown All estate grown grapes, been farming since 1965! They’re also fruit growers. The winery was opened in 2006. 5 different vineyards. They’re the largest estate grown in the WA state!! Great for an old or new world fan.

This is a second #roussane #wine from the Lawrence vineyard, called @otiskenyon. The 2017 vintage. This is the wine maker’s great grandfather on the label! He was the first dentist in the #wallawalla area, when another dude moved into town and started taking some business…. SO HE BURNED IT DOWN! His wife responded by getting divorced, moving 10 miles and telling everyone he died.  What an awesome #winestory. This is the kind of thing that makes wine super fascinating, buy this for the story, let alone the flavour. It’s a crisp expression, with some lemon and green apple notes on the palate.

The third white wine review comes from @lecole41. Getting schooled on Semillon! Or “hunter valley riesling”. The wine is bright and fruity in a more Australian style than Bordelais. 2016. $15 Way under priced. Go buy some! There will be no regrets. #WBC18 #WallaWalla pic.twitter.com/w6ZBJ9EmuX

Ready for some @lecole41 semillon, next up in #whitewine live wine blogging at #wbc18 . They have large diurnal swings to add freshness and acidity. This is 14% sauv, to give it a hint of flint and minerality. Retails for a deal at only $15. YUP.

This is a big and bold flavour, I am impressed! Huge punch of mid palate flavour right there. Lovely viscosity, arising from some older barrels to give it a nice, food friendly wine.

@yealands is wine #4. Nz sauv. 2018. $15. Smells like you are mowing the grass in a lime orchard. Tastes very limey. Also they have me a butterfly wine charm. With the matches from the last one reminds me of Bart Simpson. No one ever suspects the butterfly #WBC18 pic.twitter.com/SmtELdTJUp

Fresh vintage! This is a 2018 from the @yealands winery, because the southern hemisphere is so far ahead of us. #newzealand #sauvignonblanc classically. This is another affordable bottle.

They have heaps of great sustainability practices, like using babydoll sheep which are tiny, so they can eat the weeds but not the vines. #sustainability #permaculture #ecology #integration

The @desertwindwine folks are making #chardonnay on one of the hottest pieces (by temperature!) of land in #columbiavalley. This wine is $28 that’s gone through 100% malo fermentation in 25% new french and 75% old french. The result is a smooth, buttery wine, but without a huge oak punch, it’s delightful. This has lime zest coming through as well.
They are the only resort style winery in #washingtonstate so come visit! They’ll treat you right. #wbc18 #wineries #visitwallawalla

Wine #6 comes from Bodega Bouza. 2017 Albarino. $20. Made by the descendants of Galician immigrants. If you visit the winery they have a classic car collection. #WBC18 #WallaWalla pic.twitter.com/gai4RDnVVd

Bring on the #albarino from @bodegabouza . They were the first to start growing this, getting things going in Punta Del Este. It has six months on the lees for some creaminess, only 10% is fermented in oak, to give it some flavour. Popular for seafood, shellfish and white meats.

Just outside of #montevideo taking their game to the world. The soils are clay and great for viticulture, combined with a nice fresh Atlantic viticulture. Sells for around $20.

Certified Salmon Safe! This is a wine from @cvwcwine We’re talking #brothels with a taxi service! This is not a kid friendly winery, so go visit for a good time! They LEAN IN to the branding. There’s even stuff for sale, wink wink.

Fun and complex flavours, this does not have the taste I hate in #riesling… I wouldn’t even notice it was a riesling honestly! #wbc18 Shockingly good, I definitely recommend it, as a wine and a destination!

Wine #8 is from @rsvineyards. Poured by @masi3v. Chardonnay from Chalk hill. 2016. $22. Whilst Rodney may have been a better dancer than businessman the wine does anyone credit. If you’ve only had the the base Rodney String wine check it out. #WBC18 pic.twitter.com/I8lKceqimA

Next up is some #russianrivervalley $22 #chardonnay from @rsvineyards Jeff Kralik is here repping them well! Look at the beauty of that pour.
This is classic california in a bottle, a nice smooth, fully oaked #chardonnay. Exactly what you’re expecting, well executed. “Sous vide chicken that’s then grilled, topped with a mushroom and creme fraiche sauce, served over egg noodles.” There’s your delicious pairing note from @masl3v

Wine #8 come from @Cadaretta. 2016 Sauv Blanc Semillon. $23. Stylistaclly super neat. The sauv (67%) comes across like a nice NZ. But the semillon tries to work like Bordeaux blanc. Though more outnumbered. New and old world in one glass. #WBC18 pic.twitter.com/odTQjFBtYA

A longstanding local family decided to get in on the wine game at @cadaretta, starting in 2005. This is a sauv/semillion blend and their only #whitewine.

This is a light, smooth drinking wine with a bit of an acid profile to keep it balanced. Definitely a cool climate style wine, with some hints of floral on the nose.

Wine #9 is @FrankFamilyWine. With a carneros Chard. 2016. $38. While at first blush it’s a classic Cali Chard. Still tonnes of fruit but more minerality than is typical from Cali. Cooler tasting than most Cali. Great wine, Check it out!!!#WBC18 pic.twitter.com/1ZX8QUO5Ur

Have we had too much wine to count at this point? Maybe. Maybe.

This photo shows the pace! Super fast wine coverage. This is from 2016, representing California. This is a #chardonnay for $38. Barrel fermented for 9 months, with all sorts of crazy oak experiments of new, old and blending! #wbc18 #winereviews #battonage

@frankfamilywine is what’s hiding amongst the blur! Great golden colour! This won’t overly hit you with oak, it’s subtle, but still a #chardonnay made in the classic cali style, there’s no mistaking the origin! There’s a bit of salinity in the middle, to give it some fun variation. #carneros #california #napavalley #napa #oak #minerality #whitewine