You are here: Home / Cocktails / How Many Bottles of Beer are in A Bottle of Wine?
Pin146
Share26
Tweet
172 Shares

We know what’s been keeping you up at night. How many bottles of beer are in a bottle of wine has been a somber thought plaguing your every waking minute. It is one question that seems so simple yet so elusive. Finally, the answer to that burning question:

How many bottles of beer are in a bottle of wine?

Buckle up, have a sip of wine (or beer), and get ready because there’s going to be some math involved here. First, let’s start with volume.

Common beer volumes or “How many ounces are in a beer?”

Growler: Glass jug usually used to transport craft beer out of a place. Has a useful handle. 64 fl oz or 1892 ml.

6 pack: Usually held together with a cardboard box for glass beer bottles, or plastic rings for cans of beer, a six pack has six beers.

12 pack: The same as above, though it’s rare to get a specific 12 pack of beer cans, that’s just two six packs.

18 pack of beer: This odd size box is sometimes available for bottles of beer. It’s nice as it’s not as heavy and bulky as a case.

Case of beer or a Flat of beer: The volume in a case of beer is 24 bottles or 24 cans, which in the US totals 288 fluid ounces. For cans of beer, it is usually four six packs held together with a cardboard flat at the bottom, which is the namesake of a “flat of beer” in Canada. Sometimes a case of beer cans comes  in a cardboard box, similar to how soda is sold.

Wine bottles: Come in a variety of sizes but the most common you’ll find on the shelves are 750 ml and 1.5 L.

To answer our other question, there are ONE THOUSAND bottles of beer in a barrel of wine! Save that fact for your next trivia night. That’s like… 6 kegs. Good to know if you’re having a great party and want to make sure you supply the same amount of wine and beer.

If you’re going by just volume beer is not only going to be less expensive, it’s also lower calorie. In fact, drinking the whole bottle of wine is going to set you back over 600 calories (sorry!). 750 ml of beer, on the other hand, is less than 350.

But that’s not the whole story, is it? Now on to the most important question: which will make you more drunk.

So if you have a cup (250 ml) of each you’d have to drink more than 2 cups of beer to equal one cup of wine’s alcohol content.

Oh, and in case you’re wondering what this means for your case of beer? Standard beer cans and bottles have the same volume so you’re still looking at the same amount of canned beer per bottle of wine.

Next time you’re up against a beer drinker matching them one for one with your bottle of red take comfort in knowing that it’s not your inability to hold your liquor that’s making you way more intoxicated than your beer drinking friend.

For the record, light beer in north America doesn’t have less alcohol in it, just lower calories. So there’s the same amount of bottles of light beer in a bottle of wine as there would be regular beers. Just so you know.

Also, for the sake of accuracy, it’s also important to note that there are plenty of beers out there with more or less alcohol in them too. Non-alcoholic stuff, which might still have 0.5% ABV, is available in most varieties. There’s also plenty of brews that sit around 8-10% ABV. Japanese Green Tea IPA, a pale ale, is 10.1% ABV. Choose a Vinho Verde wine from Portugal and enjoy the same alcohol content per sip. Brewmeister Snake Venom will kill both your liver and wallet at 67.5% and $50 per bottle.

Now the number I used for the average bottle of wine is just that – average. Wine varies from 5.5% on the very low end all the way up to 23% ABV.

Lower alcohol content is usually described as having below 10% ABV. These are usually sweet wines, which unfortunately for me are my favourite. Italian Moscato d’Asti is a great example at only 5.5%.

At the other end are 15% ABV high alcohol wines. They’re pretty uncommon because it’s hard to get a high alcohol wine naturally – most are fortified with brandy or other spirits. This is the category where you’ll find drinks like Vermouth.

In the middle are most wines you encounter in your daily life, in the alcohol content of 10-15%, or based on what’s most popular, an average of 11.6%.

Generally speaking, a bottle of red has more alcohol than white wine. It has to do with how much of the sugar has fermented in the grape at the time of picking. Of course, this is still going to differ wine to wine so the best way to find out the alcohol volume is… Yep. The label.

Oh yeah, and ABV labelling is a requirement in North America but it’s not always exact. Apparently it can differ by up to 1.5%.

So there you have it; everything you didn’t need to know about converting wine to beer quantities by volume and alcohol content. 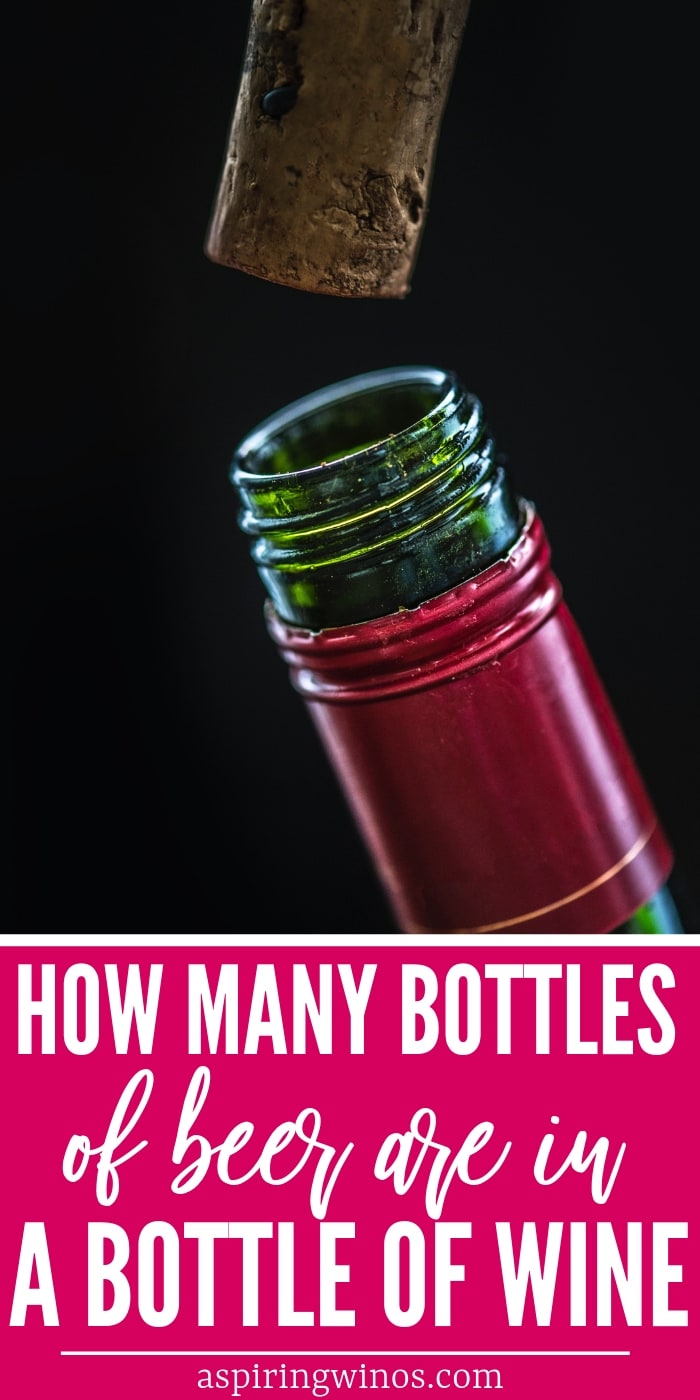